If you’ve been keeping up with the news lately, and you’re anywhere on the Atlantic coast, you may have heard about the Snowy Owl irruption. There’s an abundance of lemmings this year, leading to an abundance of Snowy Owls… and when there are too many they move south to look for more territory. Of course as it warms they’ll head back north but for now… they’re in “all the wrong places” and you might just get lucky enough to see one (or two, or three, or heck, if you’re near Assateague I hear there are five!).

In any case, as several attempts to see a Snowy Owl in DC (which I later learned was hit by a bus, put in rehab, and is doing well (follow her on Twitter @DCSnowyOwl), I found out that there was another one hanging out at, of all places, the mostly-closed-for-renovations Springfield Mall in northern Virginia.

For those of you not local… Springfield Mall is in the heart of a massive DC suburb with a set of highway ramps unaffectionately known as the mixing bowl. Not really a place you’d expect to find a stray Arctic wanderer, but hey, I’d seen photgraphic evidence!

Scruff drove me down on a Friday evening. We spent two hours circling the mall, with no luck – it had been the Tuesday night, Wednesday night, and Thursday night! I heard the next day it was seen again on Saturday, so Sunday I drove down myself and spent the hours just before sunset driving around and around the mall. I drove to the top of several of the parking garages, when suddenly, in a mall with only three stores open and pretty-much-empty garages, I saw about 5 cars on the top level. I knew immediately I was about to see a Snowy!

I parked, and went over to a couple with binocs, and they helpfully pointed out where the bird was perched in the distance (birders are friendly like that). 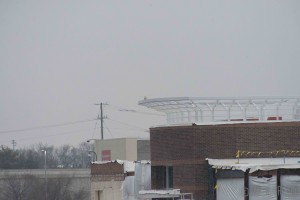 After staring gleefully for a bit, I followed the crowd down the parking garage to the open lot right near Target – and was in range close enough for a great shot with my 200mm lens! So without further ado here’s good shot of my Snowy Owl sighting. 🙂 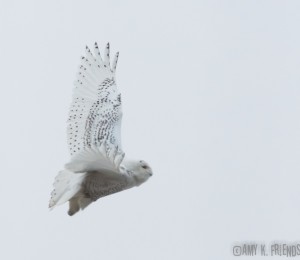