The big news according to Scruff is – I’ve joined the Dark Side and bought a Mac. Hopefully, that means fewer issues! This is the inaugural Mac post… 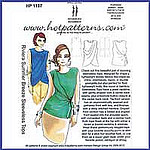 Since it’s summer weather, and I had the pattern, I’ve joined. This is week two, and we’ve chosen our fabrics, decided whether to convert the top into a dress, and cut out all our pieces, as well as stitched one seam.

The reviews of this pattern indicate that’s it’s pretty straightforward to put together.  Having made a least a few tops (and many bodices, in the construction of dresses), I thought this would be a pretty simple sewalong! So far, it’s been more of a challenge than I expected, and I was already anticipating issues with with my fabric, since I usually use less slippery ones!

Some things for folks to consider when choosing this pattern: 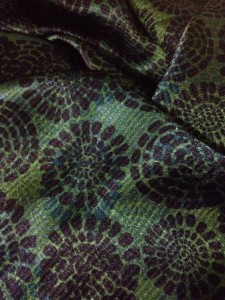 A poly “hammered satin” charmeuse from my stash

A poly “hammered charmeuse” from my stash. My adjusted pieces are all cut out and awaiting the next task.

In the meantime, a sneak peek at another project I’ll be sewing at the same time (not literally, Scruff, and my fingers usually make it without being sewn together too): 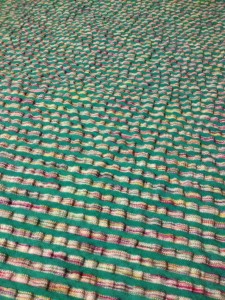